FMG Stadium Waikato has become Hamilton’s biggest sandpit as work on its new turf gets under way.

The $1.3 million Hamilton City Council project is bringing the state-of-the-art Desso hybrid turf to the North Island for the first time. 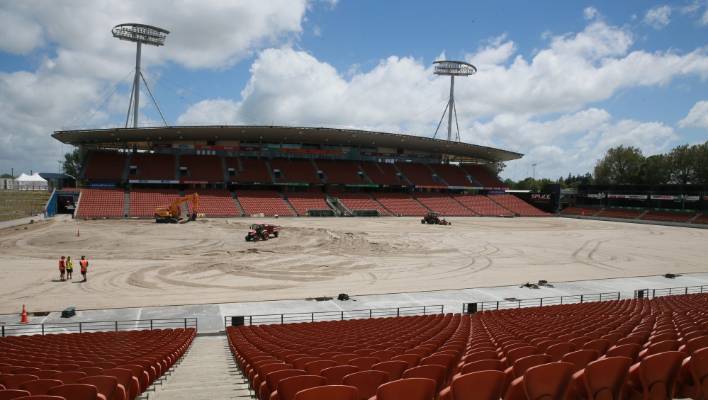 The stadium, which plays host to top sports teams such as the Chiefs and the All Blacks, was in desperate need of an upgrade, turf manager Karl Johnson told Stuff.

It’s essential to meet the increasingly high expectations of clients looking to book the venue, especially for rugby test matches and FIFA football games, he said.

“This is world class turf, we need to have this to bring in the clients.”

It’s been a decade since the field was upgraded to Motz stabalised turf, and while it was at the top of its game back then, over time it’s become harder and harder to maintain.

The stadium’s centrepiece is now unrecognisable – a sea of green resembles a giant sandpit after 2200 tonnes of sand was trucked in from Tamahere.

Hamilton Sevens 2020 : Next comes the turf sewing machine from Europe.

It will punch fibres 20cm into the sand leaving 2cm of artificial green sticking above ground.

Ryegrass seeds are then sown on top. They’ll tie in to the fibres and reinforce the playing surface.

This method increases stability, meets drainage requirements for high profile sports games and visually the audience and players will never know what lies beneath, Johnson said.